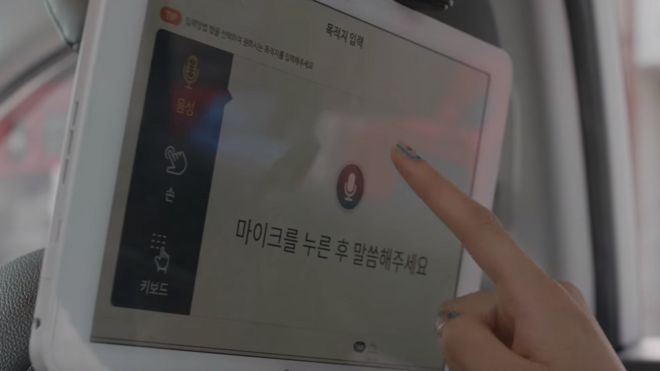 Lyft and Uber are both already equipped with assistive technology to help out their deaf drivers, and now it’s spreading around the world! Two taxi drivers in Seoul are now able to transport passengers around the city thanks to a system of tablets, hooked up with a speech-to-text software. Goyohan Taxi (or “Silent” Taxi) uses their own personal app which connects a tablet in the front seat and one in the back so that passengers can communicate effectively with the driver!

CEO Song Min-pyo explained to BBC (here) that he wanted to create more job opportunities for the deaf and hard-of-hearing Koreans in Seoul. He cites ignorance as the original source of necessity, stating “[w]e knew Koreans would step out of a taxi the moment the driver tried to communicate with a notepad and a pen… so we developed this app.” He claims he was inspired by Uber’s initiative to add additional features to their apps to allow for better communication for deaf and hard-of-hearing drivers in the United States. Way to break down some barriers, Mr. Song!

For more information about deaf and hard-of-hearing drivers with Lyft and Uber, click here!

We’ve been focusing on a lot of actors/actresses lately, so let’s take a took at Laura Redden Searing: Deaf Poet and Journalist!

Searing became deaf after a bout with spinal meningitis at the age of eleven in 1851. She was lucky to have supportive parents who learned Sign Language along with their daughter, and she eventually attended the Missouri School for the Deaf in Fulton. In 1857 Searing began submitting poetry to Harper’s Magazine, and soon began to write essays and sending them to various publishers. One year later one of her essays appeared in the American Annals for the Deaf, focusing on sign language and deafness.

In 1859 she was hired as an assistant editor and columnist at the St. Louis Presbyterian, and became an editorialst for the St. Louis Republican a year later. She covered key events during the Civil War, even writing to Presidents Abraham Lincoln and Ulysses S. Grant! She eventually worked for the New York Times as a correspondent, and then as a staff writer for the New York Evening Mail.

Due to the standards at the time, Searing did not go on to attend college. She was unmarried (a big no-no at the time), and colleges weren’t even accepting deaf women until 1881! Instead she traveled Europe and studied a variety of languages including Spanish, Italian, French, and German and eventually met the man who would become her husband- Edward Whelan Searing.

We addressed a few key questions about ASLdeafined on our Facebook page this week, so here are some of the highlights!

Handshape of the Week: E!

The E-handshape involves curling the fingers almost into a fist until the side of your hand looks like the letter e, shown below in the sign for EASTER!

Other Signs The Include The E-Handshape: