Derrick Coleman at the Phoenix School of the Deaf, from their Facebook Page

The Phoenix Day School of the Deaf was paid a visit by famed deaf NFL football player Derrick Coleman on Tuesday. Derrick talked about his life, his struggles to be taken seriously in football, and what motivates him to do his best on and off the field.

The Daily Moth interviewed the school’s principal. Principal Courtney Fritz said “We had him visit because we wanted to motivate and inspire our students by talking about his life and his current experience as an NFL player. Derrick himself is already motivated, inspired and friendly. He’s interacted easily with our students. For me, from my perspective, his visit was very powerful because he talked about how in life in general, in our past and in our future, we will always have barriers and challenges we must overcome.”

They also interviewed senior Maddie Fears, who was very inspired by Coleman’s visit. ” I was honored to meet Derrick Coleman from the Cardinals. It was really powerful and impacted me. Growing up, I’ve worked hard to be a pitcher, and he worked hard make it into the NFL. He didn’t give up, so I won’t give up too. I proved my coaches wrong and showed I can pitch, just like he proved some of his old coaches wrong by making it into the NFL. Wow. His message to kids and people of all ages is that they can do it, no matter what it takes. Don’t doubt yourself. You really can do it. Don’t let your hearing stop you. You’re deaf, but you still can do it. It’s a great and powerful message. “ 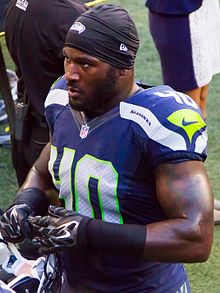 Derrick Coleman during his time the Seattle Seahawks, via Wikipedia

While we’re on the topic, let’s talk about Derrick Coleman and his journey to the NFL! Derrick Coleman was born and raised in California and became deaf at the age of 3. Coleman never attended a deaf school or learned ASL, and to this day relies on lipreading in conversations.

Coleman was noticed while playing football for UCLA as a running-back, and very quickly grabbed attention in the NFL as a deaf football player. He was signed to the Minnisota Vikings for a brief period before joining the Seattle Seahawks. During his time with the Seahawks he scored his first touchdown in a game against the New Orleans Saints in 2013. The following year he obtained his Superbowl ring in Super Bowl XLVIII against the Denver Broncos. He was suspended after a hit-an-run incident in 2014, but eventually signed on to the Atlanta Falcons in 2017. Earlier this year he joined the Atlanta Falcons, sporting the #32 jersey.

Looking for that perfect gift to give out this holiday season? ASLdeafined offers the perfect stocking-stuffer! Whether your giftee is hearing or deaf, they will love to learn this expressive language. Click HERE to learn more about our Gift Certificates.

Handshape of the Week: G!

The G handshape shows the thumb and index finger about an inch apart, as demonstrated below in the sign GERBIL.

Other signs that use the G handshape include: