Politics is quite the topic as of late but a few candidates are determined to make changes- and they’re deaf!

First, Robb Dooling won a Commissioner seat in the Advisory Neighborhood Commission (ANC) in Washington D.C.. This area includes Gallaudet University. Dooling earned a hearty 95% of the total votes.  (Although, he was the only one on the ballot.) Dooling is Deaf and also queer, and very proud of his win. According to The Daily Moth, he believes he was supported as a candidate because the area wishes to make everyone feel welcome.

Second, another Deaf candidate earned a Commissioner seat in the Advisory Neighborhood Commission in the area of Dupont Circle. Matthew Sampson, the only candidate on the ballot and a Georgetown student, won 94.5% of the votes and defeated the write-in candidate. Sampson is just as proud of his win- He tweeted a picture with Robb Dooling (shown left) and said, “Honestly we’re the hottest deaf commissioners in the world.”

Congratulations to both candidates, and good luck! 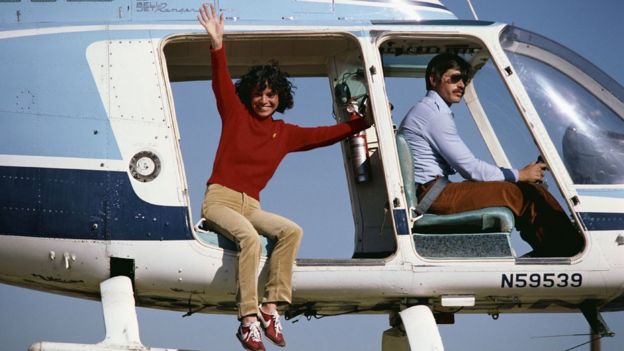 Kitty O’Neil, who lost her hearing at 5 months old, unfortunately passed away of pneumonia last Friday- but not without leaving behind quite a legacy.

O’Neil was a stunt-double in the original Wonder Woman series in the 1970s doing stunts for Lynda Carter and was the first woman to work for Stunts Unlimited, a hollywood stunt-double agency.  She also did stunts in Smokey and the Bandit II, The Blues Brothers and The Bionic Woman. She became so famous that she had her own Barbie doll, and when a movie was made about her she made sure to be a stunt-double in that movie too (for Stockard Channing in Silent Victory: The Kitty O’Neil Story).

She was also a fan of fast cars, and took an interest in speed racing. She broke the land-speed record for women by traveling 512 miles per hour in a rocket-powered car called “The Motivator”. She wasn’t always successful, however, flipping a Corvette while attempting another record two years later.

We wish a peaceful rest for the woman who was never afraid of everything, and send condolences to her family and friends.

What’s Going On With ASLdeafined?

November 16-18th, ASLdeafined will be presenting at the ACTFL conference. The title of our presentation, “Implementing & Integrating Technology with American Sign Language”. We will also have two booths to demonstrate the latest features on ASLdeafined.com. Come and meet our entire ASLdeafined staff. We hope to see everyone in New Orleans.

Handshape of the Week: T!

The T-handshape is a closed fist with the thumb between the index and middle fingers, as shown below in the sign for BATHROOM.

Other signs that include the T-Handshape are: